We need to reject our ‘man alone’ culture 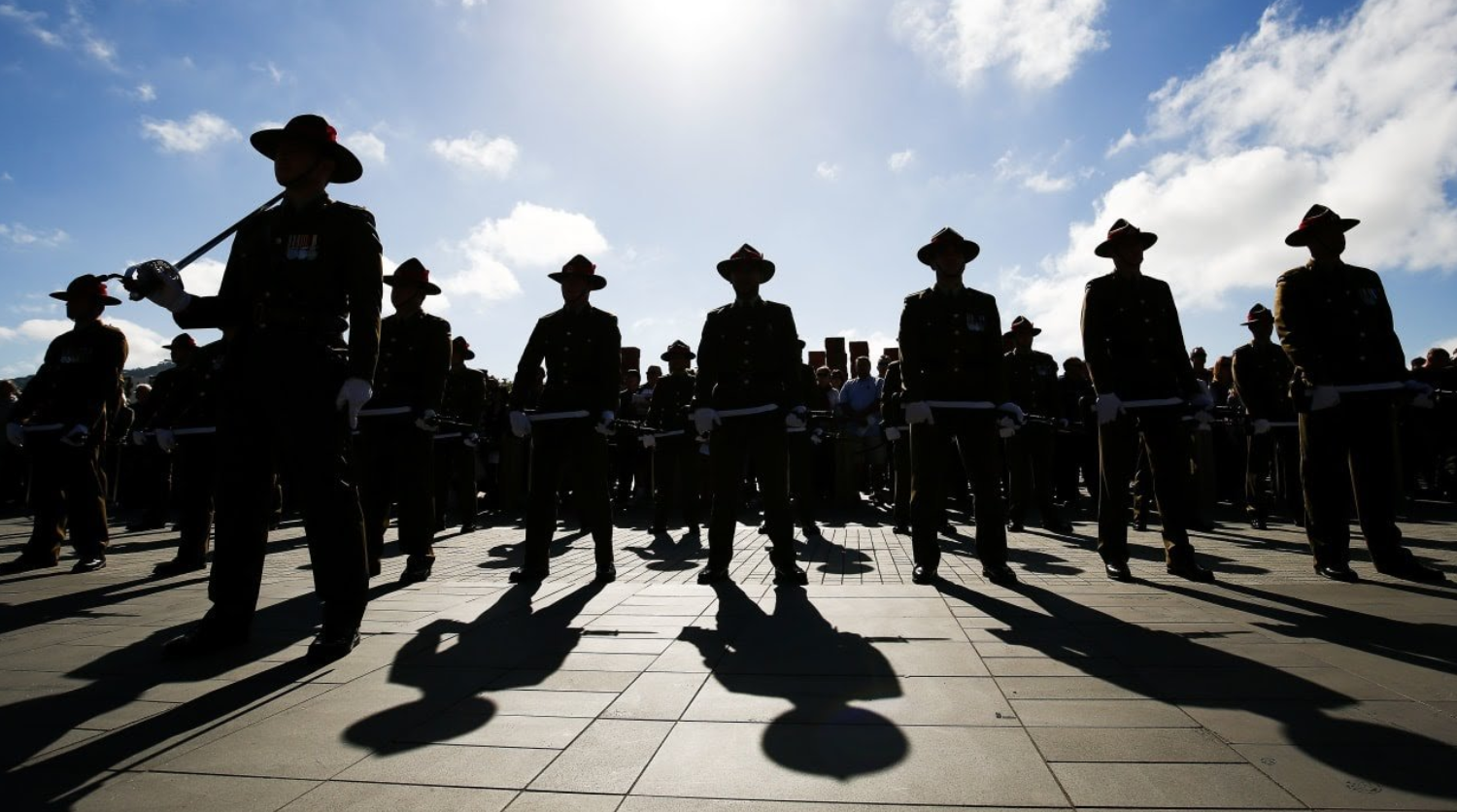 Inspired by his time in the Army Reserve, Pete McKenzie says we must push back on Aotearoa's brittle 'man alone' model of masculinity

The sentry bustled round each morning to wake the bodies sleeping in pairs of shallow pits. Each pair took it in turns to throw on a dirty uniform while the other boiled water for breakfast, a shave and a hot brew. It all had to be done in time for stand-to, when we would slip from our shallow sleeping bays into our chest-high trenches with our rifles ready. My mate and I would sneak sips of ration-pack coffee and ‘chocolate drink’ as we watched the sun crest the Kaimanawa Range.

I struggle when I’m asked why I joined the Army Reserve. It’s not what people expect of a law student born into an artsy Wellington family, with no military connections besides great-grandfathers in the Great War. It’s hard to explain the precise combination of curiosity, desire to serve and keenness to test myself.

It’s easier to explain why I stayed. Days spent in the Waiouru Training Area are gruelling; patrol here, clear there, secure this, lump that. That is balanced by the companionship it creates: the foul encouragement from the partner bounding with you in an assault, the muttered jokes while gripping the gun on sentry, the rhythm of working alongside others in a daily routine you’ve all memorised.

I was discussing this with a university professor earlier this year. He nodded sagely, then asked if I’d read Man Alone. John Mulgan’s tale of survival is perhaps New Zealand’s most iconic piece of fiction; I hadn’t read it. Embarrassed, I dug out a copy before heading up for my most recent training course.

The irony of Man Alone when compared to my experiences quickly became clear. Mulgan charts the journey of Johnson, a veteran drifting through Depression-era New Zealand who accidentally murders a colleague and escapes across Waiouru’s tussocked plains into the dark isolation of the Kaimanawas. For Johnson, those hills represented utter separation. For me, they represent deep interconnection.

The Johnson character solidified in New Zealand’s national psyche an ideal male type: the solitary, self-contained and self-reliant loner, determined to live apart from the rest. As Vincent O’Sullivan wrote in his biography of Mulgan, Long Journey to the Border, “the phrase ‘man alone’ became a glib response to what is supposed to define an aspect of national maleness, what Orsman’s Dictionary of New Zealand English designates ‘a type (or stereotype) of the independent, outdoors New Zealander’. It is as though the novel is assumed to celebrate Johnson’s raw struggle with land and society, and that Mulgan proposed that experience as admirably defining.”

That isn’t necessarily what Mulgan intended. Man Alone concludes with Johnson “going somewhere with people I liked, doing something together. It’s a fine feeling. Most of the time a man spends too much alone”. According to O’Sullivan, Mulgan meant to emphasise “that without a sense of community individuals disintegrate, or survive as solitaries”. But Mulgan’s intent is obscured by the novel’s unrelenting focus on and celebration of mere survival. And Mulgan failed to learn his own moral lesson; until his death by suicide in a shabby Egyptian hotel, wrote O’Sullivan, Mulgan was convinced that “whatever problems confront one, they must be solved alone, from the resources within oneself”.

That model of isolated and brittle masculinity which Man Alone helped construct is still rooted in our society. Strangely it is Army training, with its reputation for stereotypical manliness, which emphasised to me the value of pushing against it.

The gunner and I lay five metres apart, our weapons poking over a scrubby ridgeline. We’d just finished assaulting uphill to where the OpFor – the enemy force used in training – had opened fire. It was dusk, we’d been doing assaults all day and we were knackered, but we had to keep scanning for security.

“Out of the night that covers me, / Black as the pit from pole to pole,”

I glanced to my side to see the gunner grinning at me. I chuckled and answered back.

“I thank whatever gods may be / For my unconquerable soul.”

It was the beginning of Invictus, by William Ernest Henley – the gunner’s favourite poem. Exhaustion forgotten, we turned to the shadowy Waiouru landscape and took it in turns to recite the rest.

During a previous training course the gunner – a 20-year-old former professional soldier who spent every morning he could at the gym – had wandered into my barracks room and seen a book of poetry I’d smuggled into camp. Instead of the mockery I expected, he asked me to recite some. When I’d finished, he insisted I memorise Invictus. His love for poetry wasn’t something he usually shared. But our fifteen-strong group had spent every moment together for a month, breeding familiarity and trust I had only previously found with friends I’d known for years. We were comfortable being vulnerable with each other in a way we usually wouldn’t.

Most training experiences aren’t that highbrow. But they do generate that same trust and connection, often across large personal differences. Sitting by our sleeping bays, my section had disassembled our light machine gun for a huck-out. We passed around rat-pack chocolate with hands blackened by carcinogenic carbon and listened to our foulest-mouthed member (a forty-something builder from the deep South) tell the story of how his unit, on their way back from deployment, had rioted in the streets of a southeast Asian city.

Their brawling with the locals was on such a scale that their commanding officer admitted he couldn’t punish them because so many had participated. Full of dirty and explicit jokes, the story was so outrageous that the man beside me (a twenty-something consultant from Wellington) shook his head throughout – half in disapproval, half in wonder. These two would never have met each other in civilian life; they moved in entirely different geographic, professional and social circles. And yet, forced together by a shared purpose, they could joke with each other without awkwardness or suspicion.

Grim social and political effects of the ‘man alone’

You learn fast that you’re entirely dependent on the team around you. On my latest stint in Waiouru, we were assessed on our ability to command a ‘platoon’ – normally, about 30 soldiers. Each candidate would slot into the platoon commander role for a task. For the commander to succeed, everyone else had to be on form. They had to provide security, they had to patrol for kilometres, they had to throw themselves over hundreds of metres for the assault and then crawl the final stretch to the OpFor position. That’s not something a leader can do for them; your success is entirely dependent on their willingness to work.

Because of that poisonous ‘man alone’ model of masculinity, the deep interdependence and trust which I found in Army training is something many Kiwi men haven’t experienced. Recent research by Movember showed that 71 percent of Kiwi men thought they were ‘man enough’ to work through emotional challenges alone and that 40 percent actively avoid talking about those challenges because they don’t want to appear weak.

Mental ill-health and emotional isolation is common in every New Zealand demographic. But it has had particularly problematic consequences for men. It has, for example, contributed to our horrific rate of male suicide. Since 2007, approximately 19 men in every 100,000 have taken their life each year – 471 in total in 2020 alone. The rate is highest among 25 to 34 year olds, in which bracket approximately 32 men in every 100,000 commit suicide annually.

The emotional and social isolation produced by that ‘man alone’ model has also had grim social and political effects. It drives the growing male resentment – especially in concentrated online pockets like 4chan and 8chan – which has helped fuel a global political resurgence of white supremacism, misogyny and authoritarianism. As Pankaj Mishra, the author of Age of Anger, has observed, the “existential resentment of other people’s being, caused by an intense mix of envy and sense of humiliation and powerlessness, ressentiment, as it lingers and deepens, poisons civil society and undermines political liberty, and is presently making for a global turn to authoritarianism and toxic forms of chauvinism”.

Until the Christchurch terror attack, through some combination of luck and socio-economic cushioning, New Zealand had escaped the most violent manifestations of this anger and resentment. That is no longer the case. In addition to the everyday aggression of the isolated and resentful against our society’s most vulnerable, we must now worry about acts of extreme violence.

Mulgan captured something of this modern reality when he observed that prior to the Depression “[New Zealand] had always been a lucky country, a country where, if a man were well and strong, he could wander about and live well and eat well, where everybody was your friend in a hard, casual way… It was strange to see how things changed now that the luck had turned, how people grew uneasy and careful with each other, and kept to themselves, watching and saving what they had.”

Our luck has turned as well; we are entering a global recession which will exacerbate existing societal fractures, whether social, economic or ethnic. We can’t skate over the threat posed by the angry and resentful anymore. We have to figure out how to rebuild our communities and eliminate the emotional and social isolation which produces that anger and resentment.

Army training isn’t a perfect solution for that. My experience might be unique; I’m sure the experiences of those in the Regular Force, or of other reservists, are much different to my own. Even if they weren’t, Army training is not something everyone in New Zealand would find useful or helpful.

But the broad themes of my experience – of a common purpose bringing together people with very different backgrounds, where interdependence and mutual trust is necessary, and where people are willing to be vulnerable with each other – are useful guides about what is most effective at challenging the emotional and social isolation of a ‘man alone’ culture.

Mulgan didn’t understand that. He often advised friends and family that, “submergence of oneself to other people, a feeling of helplessness or dependence on them is a terrible thing”. At every level – in government, among communities and with individuals – we have to push against that. The solution to poisonous emotional and social isolation is not stoic endurance, but the growth of connection and interdependence.